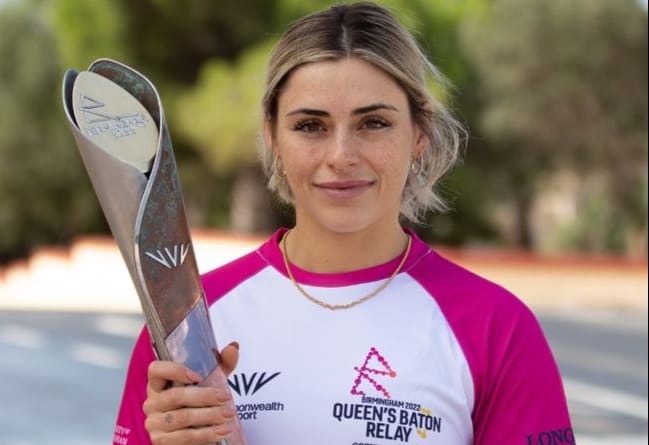 The Birmingham 2022 Queen’s Baton Relay is confirmed to visit Pembrokeshire during its final journey before handing over to England this summer, as the full route is revealed.

Birmingham 2022 is hosting the 16th official Queen’s Baton Relay – a journey which brings together and celebrates communities across the Commonwealth during the build up to the Games.

In Wales, the Queen’s Baton Relay will provide the opportunity for communities to experience the excitement for Birmingham 2022, as the 11 days of show-stopping sport nears ever closer.

The Queen’s Baton Relay is set to travel through Wales over five days, before returning to England and culminating at the Opening Ceremony for Birmingham 2022 on July 28.

Kicking off on Wednesday June 29 in Anglesey, North Wales the Baton will travel down the Country and across South Wales, with a grand finale in Swansea on Sunday July 3.

A busy schedule of activities and events are planned for the Queen’s Baton Relay, with opportunities to highlight stories from Batonbearers in their communities.

During its time in Pembrokeshire on Friday, July 1 the Queen’s Baton Relay will visit an Iron Age village, take a boat crossing with Sea cadets, meet Jemima’s Army and travel by military vehicle.

The schedule of activity for the Baton’s time in Pembrokeshire includes:

• Arrive at Castell Henllys to proceed through the Iron Age village, carried by local school pupils (this will not be open to the public).

• Travel to Lower Town Fishguard before transfer by boat to Goodwick.

• Come face to face with Jemima’s Army who repelled the Last Invasion of Britain.

• Finish at Ysgol Bro Gwaun where further activities are planned throughout the day (not open to the public).

Members of the public are encouraged to get involved with the celebrations and embrace the arrival of the Baton, taking the opportunity to experience the buzz of Birmingham 2022 in their community.

The Team Wales website will be updated with information over the coming weeks, with detail on the events and where to line the route.

Pembrokeshire County Council Cabinet Member for Leisure, Clr. Rhys Sinnett, said: “It is a huge honour to have the Queen’s Baton Relay visiting Pembrokeshire in this Platinum Jubilee year.

“Along with local partners, our teams have been working hard with organisers for many months to create a relay that encapsulates how the Games bring people together but also provide a flavour of the beauty of Pembrokeshire and the spirit of our people.

“As a Council we see sport and leisure as vitally important for health and well-being and this is a welcome opportunity to highlight the positive impact of keeping active throughout our lives.

“We also hope this visit will help to inspire the next generation of athletes to represent Wales at Commonwealth Games of the future.

“We would love to see people come out to support the Baton travelling through north Pembrokeshire and further details will follow.”

Clr. Di Clements, Vice Chair of Pembrokeshire Coast National Park Authority said: “It will be an honour to welcome the Queen’s Baton Relay as it makes its journey through Wales.

“Over recent years, Pembrokeshire has established itself as a world-class destination for sporting events and made its mark as a source of inspiration, not only for professional athletes, but for those of all ages and abilities to get out and get active.

“The Baton will be transported to Castell Henllys Iron Age Village by pupils from Ysgol Eglwyswrw, who will be greeted by Village Chief, Liz Moore. Liz has worked for the Authority for many years and played a key role in establishing the attraction’s popular schools programme, which teaches about conservation and sustainability as well as life in the Iron Age.

“These themes will feature prominently on the day, with workshops on sustainability and Iron Age sporting activities to follow the event.”

Hundreds of Batonbearers, each with inspiring backgrounds and stories, will have the honour of carrying the Baton during the journey through Wales, including those nominated in recognition of their contributions to their local community, whether that be in sport, education, the arts, culture or charity.

Details on the Batonbearers for the Pembrokeshire leg will be announced in due course.

The Birmingham 2022 Queen’s Baton Relay began at Buckingham Palace on October 7, 2021, when The Queen placed Her Message to the Commonwealth into the Baton and passed it to four-time Paralympic gold medallist Kadeena Cox and Team Wales 2018 Gold medallist Lauren Price who had the honour of being the first of thousands of Batonbearers to carry the Baton.

Since then, the Baton has visited Commonwealth nations and territories in Europe, Africa, Oceania, Caribbean and the Americas, with the Home Nations being the last stop, consisting of five days in Scotland, four in Northern Ireland and five in Wales, where it will finish on Sunday, July 3, before returning to England in summer for the final countdown to the Commonwealth Games.

Commonwealth Games Wales CEO, Chris Jenkins said: “The Queen’s Baton Relay is one event that I always thoroughly enjoy being involved in. Having the opportunity for us to travel across Wales, engage with people in communities, and be part of so many different events – it really does bring us together as a country, and this certainly accentuates the build-up for Team Wales in Birmingham this summer.

“The planning and work that all the Local Authorities do to ensure the events are safe, seamless, and most importantly interesting and fun takes months of planning, and I’d like to thank everyone involved for their time, commitment and enthusiasm.

“We are now looking forward to the Queen’s Baton arriving here in Wales next month, where we will be visiting schools, historical locations and showcase the beautiful landscape we have.’’

The Queen’s Baton for Birmingham 2022 was created in a West Midlands collaboration that fused art, technology and science.

Made from copper, aluminium and steel, the Baton also features a platinum strand in homage to The Queen in her Platinum Jubilee year.

For more information on the Queen’s Baton Relay, visit www.birmingham2022.com/qbr.