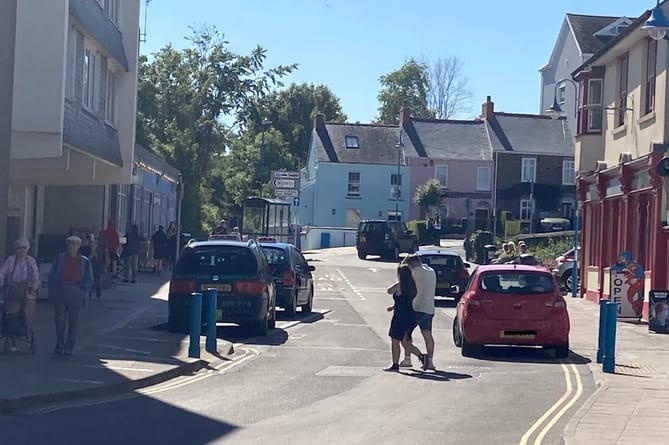 Saundersfoot councillors will be holding a meeting later this month with Pembrokeshire County Council’s streetcare and parking manager, to outline issues caused by inconsiderate parking that are blighting the seaside village.

Members of the Community Council have advised PCC’s Marc Owen of areas of concern regarding such matters, especially along The Ridgeway where vehicles are being parked on the road, and pavement at times, and during drop-off and pick-up from Saundersfoot School.

With car parking spaces in the village filling up fast over weekends and during holiday weeks, adding to the problem, County Councillors for the North and South wards of Saundersfoot, Clr. Alec Cormack and Clr. Chris Williams have also pencilled in a planned meeting with the local authority’s highways department at the end of June, to discuss a range of parking/streetcare issues with the officers.

Clr. Williams told members of the Community Council at their meeting this month: “Unfortunately Mr. Marc Owen from Pembrokeshire County Council was unable to meet us on June 1 as planned but the meeting has now been rescheduled, and Alec and I will talk about café culture along with complaints we’ve received locally regarding tables and A-Frames on pavements.

“I’ve also had numerous calls from businesses and residents regarding parking on pavements along Milford Street. Over the Queen’s Platinum Jubilee weekend I’ve submitted twenty photographs of cars and lorries on pavements, lorries unloading in the bus lane, and cars parked up while visiting shops around the street.

“Marc is aware of the situation and is happy for both Alec and I to work out the best outcome for both residents and tourists.

“I’ve also asked for double yellow lines to be marked on the kerb opposite the bus stop which will then make it illegal to park there,” continued Clr. Williams.

“Alec and I have been contacted regarding cars parking on Whitlow estate. Some residents have had driveways blocked and when they confront parents they get a torrent of abuse. Alec and I have arranged a meeting with Saundersfoot school to discuss this ongoing issue.

“Even though Whitlow is in the North a lot of the parents are driving from Saundersfoot South of the village and we thought it needed both of us to resolve the problem,” he added.