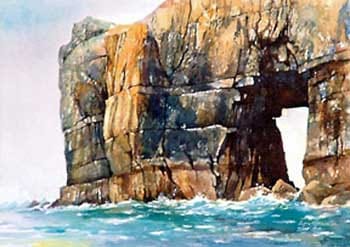 For most of his life Barry Herniman denied himself the full expression of his talent and interest, and did almost anything else to avoid becoming the award-winning artist he has now become. Barry was 'arty' at school, and won competitions. By the time he was due to leave school Barry wanted to be a commercial artist. His art teacher pointed out the high level of competition and he went to college to study Maths and Physics. Barry had a series of jobs relating to design, eventually setting up his own graphic design business, but continued to draw and paint whenever he could. By 1991, Barry had built up a sufficient body of work, had learned how to frame it and organised his first exhibition of watercolours in Ross-on-Wye. Now he knew what he wanted to do. He wanted to teach, to run courses and art holidays, to make his own videos, to write articles and books about painting, to demonstrate, to show his work more widely, to paint what he wanted. And since 1999, Barry has done just that. His painting style is described as 'loose and lively, but with an eye for detail': a mixture of very wet washes, colours mixing on the paper, masking, dribbling and flicking. His paintings are realistic, but not photographic. He started with pastoral views of the Wye Valley near his home, then came to Pembrokeshire. Here he was faced not only with Tenby - the complexity and charm of the harbour and boats and buildings around - but with miles of coastline, rocky cliffs, secluded beaches, and inland waterways, woods and valleys. It was with a painting of Tenby, from the low tide line of the harbour, in a morning light, that Barry won the award of SAA Artist of the Year in 2001. Barry's work is now exhibited in three English galleries, two in Ireland, and one in Wales. Recently his first book, 'Painting Mood and Atmosphere', has been published. In this book are featured several of the paintings which will be shown in his forthcoming exhibition, of Caldey Island, St. Catherine's and Tenby Sluice. together with paintings which followed a recent boat trip along the coast, viewing the cliffs from a rough sea. as well as paintings of the many places he has visited in Britain and abroad during the past year and some steam trains. Barry Herniman's exhibition will open tomorrow (Saturday) at Art Matters Gallery, South Parade, Tenby, and end with Barry demonstrating his painting techniques, and signing copies of his book on Monday, September 13, from 1 pm to 4 pm. The gallery is open from 10 am - 5 pm, Monday to Saturday inclusive.