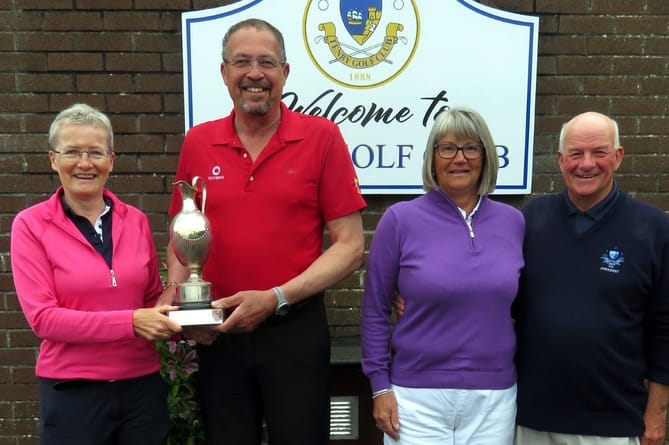 How lucky were we to be playing golf on Tenby’s magnificent links course on such a lovely day? The Mathias Thomas family have a long association with Tenby Golf Club, and the mixed competition today was to play for their trophy, donated by the daughter, Joanne Haigh, in 1978.

Her father, Mathias Thomas was a solicitor in Tenby, living in what is now Tenby House, and in 1907 he owned the golf club. He and his son Byam and daughter Joanne were all category one golfers with illustrious careers in golf.

Today (Sunday, May 15) we played for their trophy which looks like our very own ‘Claret Jug’.

The pin placements were very tricky having not been moved since yesterday’s prestigious Golden Eagle competition, so there were no twos recorded today.

However, four pairs were lucky enough to win their entry fees back in the draw.

They were - Idwal David and Sarah Waring, Mike and Nicola Anthony, Paul and Roz Jenkins and Rob Berry and Gill John.

The dry conditions and a tricky wind made scoring quite difficult for us all, but our President Idwal and Sarah Waring (always the bridesmaids!) came third with 96-21=75.

With the touch screen out of use we must thank Ryan for feeding the results into the computer, but lesson learnt that we need to go back to our old system of marking cards as there was some confusion with who were players and who were markers.

Apologies to the people who were wrongly informed! But as you can see from the photo, we had a good time which is what it is all about.

The next mixed is the Sam Ackermann Trophy which is a draw for partners. Great fun, and a chance for those who have never been in the mixed to put your names down and have a go.

The competition is on Friday, June 24 at 4 pm and the draw will be done the week before. Just sign up on Masterscoreboard. Then July 1 will be our second Friday Friendly Foursomes.

Again, a draw but sign up on the mixed noticeboard at the back of the clubhouse.

A huge thank you to Laura for helping me sort out today’s competition on the computer, and thanks also to Lyn, Helen and Emma in the bar and kitchen and to Ryan in the Pro Shop.