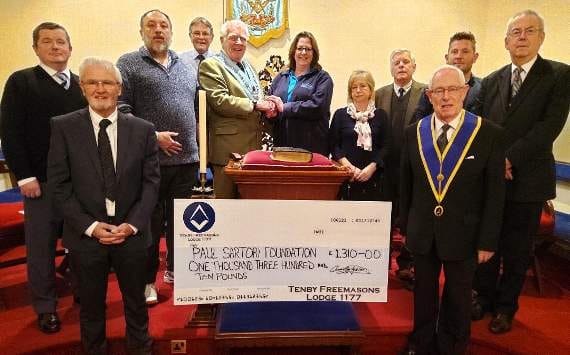 When Nigel Jones sadly passed away just before Christmas from heart failure, aged just 58 years, his wife Lorraine nominated the Paul Sartori Foundation as the recipient charity for any donations that friends and family may wish to make instead of floral tributes, in honour of her husband.

Ex-Detective Nigel, who was Llanelli born and moved to Tenby as a police cadet, was a family man. He and Lorraine had two sons. He was a well-known figure around Tenby, always willing to help people and always ready for a laugh and joke. He was a popular and hard-working member of Tenby Masonic Lodge, and when the lodge had their biggest meeting of the year at the end of January, it was announced that the proceeds of the raffle that evening would be donated to Paul Sartori as their own tribute to Nigel. The raffle raised £500, which the lodge members decided to match from their charity funds, making a total of £1,000.

This amount was further increased when Matt Ronowitz, of the Qube Restaurant, who provides catering for Tenby Lodge meetings and who knew Nigel, very generously contributed £310, making a final total of £1,310.

Lorraine, while missing Nigel terribly, was delighted that such a sum had been raised for her nominated charity in his honour. It was also fitting that Paul Sartori were the beneficiaries, as another Tenby Lodge member Kevin Bateman had been caring for his wife Carol for several years after a serious accident had left her with degenerative illness.

She sadly passed away in January, and Kevin said that he just could not have coped without the assistance and support provided by Paul Sartori carers.

Pictured are the current Master of Tenby Lodge Mr Bradley Davies with Sandra Dade, the charity manager for the Paul Sartori Foundation, Lorraine Jones, Matt Ronowitz from the Qube, and other lodge members.

Tenby Lodge charity steward Steve Thurgood said: “Nigel is greatly missed by us all, and the members of Tenby Lodge are proud to make this donation as a tribute to him. Paul Sartori is a wonderful Pembrokeshire charity that provides compassionate end of life care and support to patients and their families in our area. Charity is a fundamental part of Freemasonry, and we are pleased to contribute to such a worthy local cause.”

Donations can be made to Paul Sartori via their website www.paulsartori.org

If you are interested in finding out more about Freemasonry and Tenby Lodge, you can contact the secretary on 07778 153623 or by e-mail at [email protected]