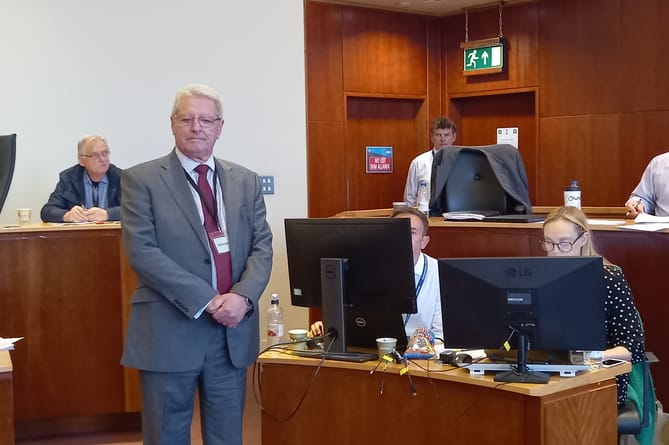 Clr. David Simpson will stand for the council leader role again he has announced. (Pic supplied by local democracy reporter )

He won the fight for his Llandewi Velfrey seat and has today announced his intention to stand for re-election as council leader.

Independent Clr. David Simpson, who has been council leader for the last five years with his cabinet Labour, Lib Dem, Plaid Cymru and unaffiliated or independent members, won last week’s vote 355 to 176.

He has said today (Monday, May 9) that having “consulted with old colleagues and newly elected members and am pleased to confirm it is my intention to stand again, for the position of leader at the council AGM in a few weeks time.”

No one political party won overall control of Pembrokeshire County Council – as in previous elections – with 35 independent or no party candidates winning a seat.

Clr. Simpson added: “The last five years have been unlike any other in the council’s history. I am extremely proud of the way the authority and our staff responded to the pandemic but above all, it was the way we came together as a community which stood out.

“I am committed to serving the people and the county with honesty and integrity. I am well aware that economically there are serious challenges on the horizon and Pembrokeshire Council is going to do everything within its power to support and stand with the people throughout these challenges.”

He adds that he would bring a “relentless focus” on enabling residents to “survive and thrive” with local needs the main focus.

Clr. Simpson adds that if elected leader at the annual council meeting on May 26 he and the new cabinet, along with other councillors, will publish the authoriti’s second ever programme of administration, setting out what will be achieved in the next five years and “ensuring that the people of Pembrokeshire can hold us to account on it’s delivery.”

Who else will throw their hat into the ring for council leader remains to be seen with a number of members sure to be giving it serious consideration.