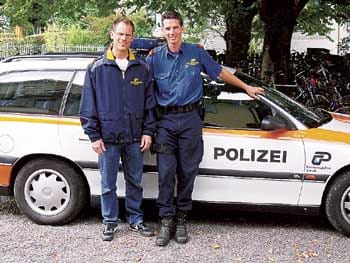 As recently reported in the Observer, two police officers with strong local connections who are serving with the County Constabulary in Zurich met up quite by chance. Alex Leu (left) and Kenneth Jones both hail from well-known Tenby families and met for the first time in the head office of the police force. Alex's mother is Raydene Kingdom, the daughter of the late Jimmy Kingdom, of Serpentine Road, while Ken is the son of Billy Jones, who now lives in Switzerland, and grandson of Margaret and the late Ken Jones, of The Glebe.