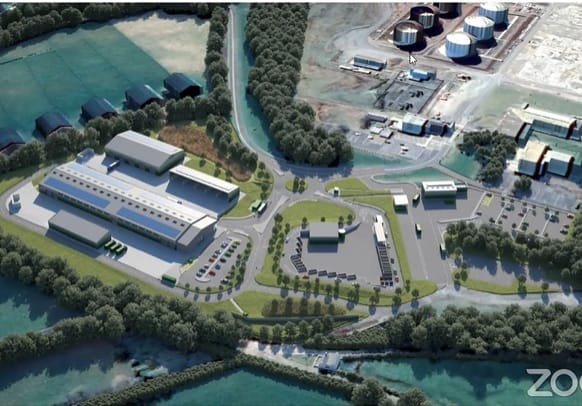 Pembrokeshire County Council has submitted plans for an 'Eco Park' for dealing with recycling and waste (PIC: Planning committee )

Mitigation measures to reduce noise will be put in place before work starts on building a new ‘eco park’ near Milford Haven, councillors have assured.

Members of Pembrokeshire County Council’s planning committee approved the authority’s application for phases one, two, three and four of its eco park where residual waste and recycling will be processed.

The application was discussed in March but deferred for a visit to the site on Amoco Road, near Puma Energy, following May’s election, where a holding direction is in place from Welsh ministers.

Members of the planning committee discussed the proposals at its meeting on Tuesday, June 14 with full planning applications for phases one, two and three and outline planning for phase four being made.

New wildlife attraction has been given the green light

Prosecution to be launched against Little Haven home owner

“We need these homes to be built” - states Tenby’s Mayor

A planning report states that waste received at Pembrokeshire Eco Park will be non-hazardous and hazardous household and commercial wastes from various local authority and commercial vehicles and from members of the public and commercial business.

Phase one is a recycling transfer facility and associated access roads to “bulk, sort and store recycled waste from kerbside collections and waste and recycling centres across the county.”

Phase three is a building for residual waste, dry mixed recycling and absorbent hygiene products and a covered area for storage of bulked materials and a quarantine bay.

During pre-application consultation there were concerns raised about odour, increased traffic and noise, as well as visual impact, location and whether smaller sites would be more suitable.

Clr. Reg Owens, local member, highlighted an agreement made in the 1970s that land be returned to agricultural use by Amoco if refining on the site ceased that he said is being ignored.

A planning report quotes legal advice that states: “On the available information it does not seem to me that enforcement of the section 52 agreement is in the public interest. The principal reason for saying that is that the area of land has been allocated in the LDP as an area for a waste management facility.”

“The local community that live in and around the Amoco site have had over the years had to put up with some terrible pollution, smells etc and nothing really was done about it,” said Cllr Owens and the closure of the refinery had resulted in “nicer living standards.”

Clr. Jamie Adams said that the site “ticks most boxes” and although the number of people affected is relatively low “we still have a responsibility to mitigate that affect to the greatest degree that we possibly can,” adding suitable screening must be provided.

He agreed with other comments that the facility would create “efficiencies” in the waste service as a replacement to the current Pembroke Dock site.

The planning committee approved delegated powers of approval to the director of community services, subject to the withdrawal of the Welsh Ministers’ holding direction impose on the development and planning conditions.