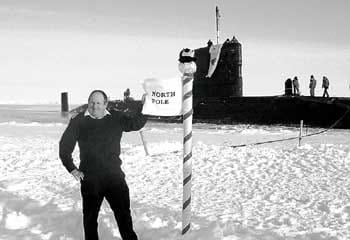 Commander Titterton when he was at the North Pole with HMS Tireless. ()

A MAN with strong local connections, Commander Phillip Titterton, has been awarded an OBE in the New Year's Honours List. Commander Titterton is a submariner and has just left his post as Commanding Officer of the Trafalgar Class submarine HMS Tireless. Speaking from his home in Tavistock, Devon, he said that when he received the news he was shocked. "I was shocked. I didn't expect it at all. It has just about sunk in now and I'm honoured and very pleased. "My wife, Sara, is very proud of me. Obviously, I haven't achieved this recognition on my own. It is down to teamwork and I am completely humbled and proud of the ship's company I leave behind in HMS Tireless as I move on to my new posting in the New Year to the Ministry of Defence in London." Commander Titterton has been awarded the OBE in recognition of his most remarkable performance as the Commanding Officer of the submarine HMS Tireless. His citation states that he leads from the front, demonstrating the very best qualities of the Royal Navy. His time in command was marked by operations in a variety of challenging and dangerous environments, including the first Royal Navy deployment under the ice in nearly a decade. The citation ends by noting that his consummate professionalism and inspirational leadership has been outstanding and in the finest tradition of the service. Commander Titterton, 41, was born and bred in Tenby. His parents, James and Linda, still live in Saundersfoot. He was a member of the Tenby Sea Cadet Unit and attended Greenhill School before joining the Royal Navy in 1981. He lives in Tavistock with wife Sara, and three children Lydia, Bertie and Maisy.