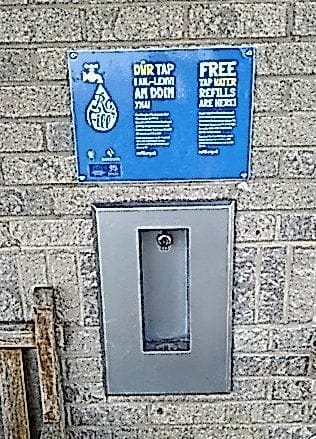 Visitors to the Pembrokeshire Coast National Park will find more opportunities to save money, stay hydrated and prevent plastic pollution at source, courtesy of eight new water refill stations that have been installed at strategic locations around the Coast.

By making free drinking water more accessible through its ‘Drinking Water Fountains’ programme, the Park Authority aims to reduce the number of single-use plastic water bottles being used in the National Park and ending up in the sea. The programme also supports the Welsh Government campaign to make Wales the first Refill Nation in the world.

Funding from the Welsh Government’s Tourism Amenity Support Scheme and partnership work with Pembrokeshire County Council and Danfo UK Ltd, has made it possible to install free water refill stations on the outside of public toilet facilities at:

No more deaths recorded in Carmarthenshire

One more death recorded in Pembrokeshire

Most expensive, busiest and trendiest parts of Carmarthenshire to buy a house revealed

Tegryn Jones, Chief Executive of the Pembrokeshire Coast National Park Authority said: “Plastic pollution can be a blight on coastal communities and have devastating consequences for wildlife.

“We’re delighted to have been able to work with partners to install these refill stations, which will help members of the public stay hydrated, while cutting down on single-use plastics when out and about in the National Park.

“These sites are part of a growing network of water refill stations across the country, and we encourage everyone to make use of them.”

The new refill stations, along with many others throughout the National Park and the rest of the UK, have been registered on the free Refill app.

Also available in Welsh translation, it can be downloaded from Google Play and the App Store. Further details are available at www.refill.org.uk