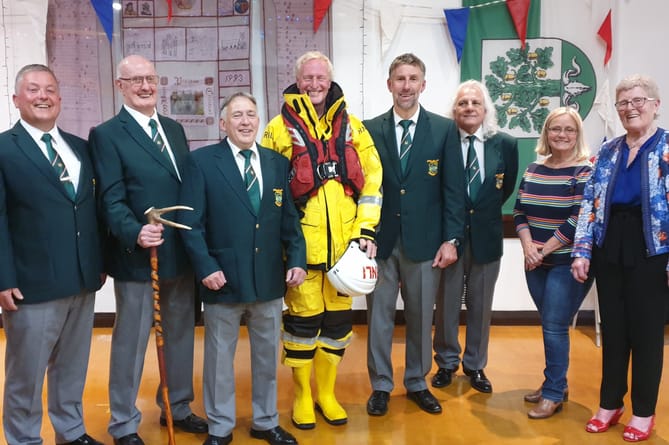 At the Pembroke Town Hall concert a willing RNLI and Choir supporter sportingly kitted out in the Angle Lifeboat Mechanic’s uniform for a photograph with organisers and choir members. With him are, left to right: Matthew John, Rod Jones with newly acquired walking stick, Dave Brinn, newly staging choristers Rob Mathias and Peter Halifax, and Penny Blackborow and Daphne Bush.

Before a full house the choir, led by Musical Director Juliet Rossiter and Accompanist Carole Rees, earned warm applause for a programme in two halves, with very welcome cawl and Welsh cakes served at the interval for audience and choristers.

It was a particularly involved evening for new Master of Ceremonies Matthew John who was joined by fellow first tenor Dave Brinn in duets – ‘Danny Boy’ and ‘I Believe’.

The choir appropriately concluded their programme with the poignant ‘Home From The Sea’ with solo verses taken by Huw Morgan, Matthew John and John Hillier.

A dream of a ballet - a sparkling reinterpretation by Ballet Cymru

In the well supported raffle second tenor Rod Jones won a unique prize – a carved walking stick donated to the organisers by David Roberts. Other recipients of David’s unique sticks include the Prince of Wales and well-known personalities.

Audience and choir were welcomed on behalf of the RNLI Ladies by Daphne Bush and the event – held for the first time since the Covid crisis – raised an outstanding £900 for the RNLI.

The second part of the choir’s weekend was at Pembroke Castle following the unveiling of the William Marshal statue. Six well chosen items almost raised the roof of a marquee, before the choir led the Welsh National Anthem.

Next concert will be on Friday, May 20 at St Twynnells Church.