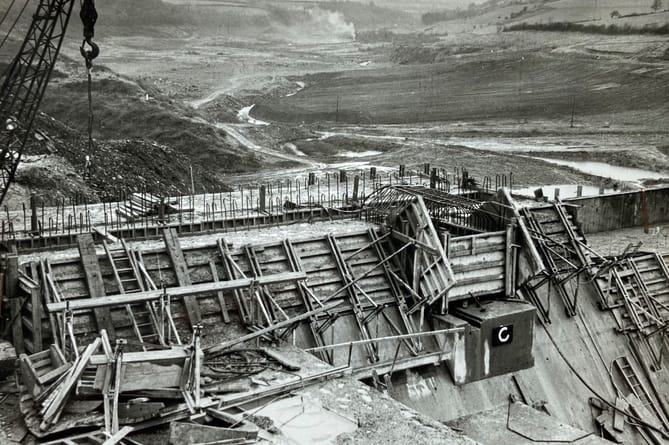 On Monday, May 9 Llys y Frân will be opening a 50th Anniversary gallery for the public to view images and documents from the construction of the dam. The wall walkway will be open from 11 am – 2 pm, with a dam scour fountain running at 11.30 am for all to see.

Work on Llys y Frân Dam started in February 1968 and the first concrete was poured in the following September.  During the construction period it was necessary to divert the Syfynwy River. By June 1970 the stilling basin, control house sub-structure, and pipework in the supply tunnel had been completed and the river was finally diverted through the pipework and the stilling basin.

The final concrete was placed on 19 May 1971 completing a total of over 500,000 tons since placing commenced in September 1968. By May, the depth of water had risen to 40 feet but it was only on December 5, 1971, exactly nine months after impounding had commenced, that the reservoir overflowed for the first time.

The dam is a feat of engineering, but it has also preserved this landscape as a haven for nature and wildlife.

Two swap shop sessions were held in April where local residents could call into the centre to share their memories, original photos and memorabilia in return for a cuppa. The first Swap Shop Day at Llys y Frân unearthed all sorts of historical gems, but what staff weren’t expecting to see was an original invitation and opening brochure from when HRH Princess Margaret Countess of Snowdon officially opened the reservoir! The opening event took place on Tuesday, May 9, 1972, organised by the Pembrokeshire Water Board.

“With the help of the public, we have created a fantastic gallery,” said a spokesperson.