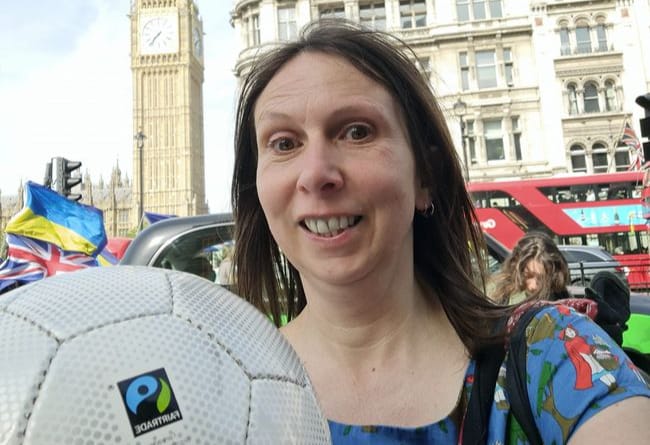 The Fair Trade In Football Campaign based in Kilgetty were recently invited to be part of a Fairtrade Panel at the House Of Commons, Westminster, in the Jubilee Room.

The event organised by Cllr. Miriam Rice, The London Co-op Party, was held to celebrate World Fairtrade Day. After visiting the Fair Trade In Football Campaign website, Miriam made contact, inviting them to share about their work, how they connect with schools, clubs and communities.

Villages unite to reform soccer side

“Our annual Fairtrade football tournament, held at our school, has been a highlight too, with local schools competing as various Fairtrade nations. This has done an incredible job in raising awareness of Fairtrade and in getting the right conversations started with staff, children, parents and the wider community. We use this as a vehicle to ensure that fairness and respect towards players is encouraged and that the values championed by Fairtrade – justice, equality and empathy – are reflected in the children’s behaviour on the football field.”

It is hoped that the MPs, councillors and Co-operative members attending will take positive action, using their power to help ensure workers, farmers and their families get a fairer deal through all that Fairtrade Standards guarantee: safe and fair working conditions, Fair, sustainable wages, workers’ rights with no forced or child labour, using methods best for the environment. Ensuring Communities benefit from Fairtrade Premiums, an extra sum of money paid per Fairtrade item sold, which Fairtrade Committee members use to improve their local communities, paying for accommodation, medical care education, clean water and more.

“It was an amazing experience walking, with my Fairtrade football, from Paddington Station to Hyde Park, Queens Park, then passing all of the famous sights, including changing of the guards and having Fairtrade cream tea at Westminster House Of Commons! It was an honour to share about the campaign and spend time with people in positions of power, I hope their involvement will enable, engage and encourage others to use Fairtrade footballs in schools and football clubs and help make steps to ensure Fairtrade standards are set in football production,” said Sharron Hardwick.