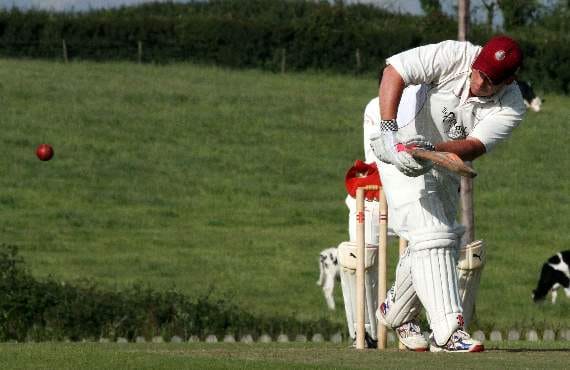 Simon Cole topscored for Cresselly at the weekend ()

Neyland consolidated their position at the top of division one of the Thomas Carroll Pembrokeshire County Cricket League with a comfortable victory over second placed Haverfordwest on Saturday.

Batting first, the leaders posted a useful total of 179 for 7 in their allotted overs, Nic Koomen leading the way with a hard-hitting 82 and good support coming from Nathan Banner with an unbeaten 35 and Ashley Sutton with 20.

The Town must have fancied their chances of chasing that down, but their Jekyll and Hyde season continued as their batsmen again failed to turn up and they were shot out for a paltry 93, some 86 runs short of their target.

Only Jake Merry with 29 and Mike Jones, 15, offered any real resistance as Tom Pritchard got among the wickets with 3 for 28 and Andrew Banner and Andrew Miller picked up a couple apiece.

The local derby between Cresselly and Carew was a much tighter affair, though. In fact, it turned out to be a real nail-biter for all concerned.

Making first use of the Cresselly strip, visiting Carew rattled up a healthy total of 219 for 6, Tom Davies top scoring with 82 and Nic Scourfield weighing in with 74.

Tom Murphy was Cresselly’s most successful bowler with figures of 3 for 32, and he also contributed a useful 32 runs with the bat as his side set about their task with determination, Simon Cole leading the charge with a belligerent 74 and Iwan Izzard and Daniel Sutton chipping in with 43 and 31, respectively.

As it turned out, though, their efforts were in vain, for when their innings eventually closed, they were just two runs short of their target and had to settle for a draw... although with just two wickets to fall, Carew might also have been reflecting on what might have been after Tom?Davies 4 for 63 and Shaun Whitfield 3 for 36 had done their best to turn the tide in their side’s favour.

Carew now sit in third position in the table and Cresselly fourth, while neighbouring Lawrenny have leap-frogged both of them into second place after a good win against visiting St Ishmaels.

Kurtis Marsh 38 and James Phillips and Robert Williams, both with 28, were all in the runs as the home side posted a total of 166 all out, Andrew Williams doing the main damage for Tish with 4 for 42.

But those figures were eclipsed by Lawrenny’s Brad McDermott Jenkins as he produced a devastating spell of 5 for 16 to reduce St Ishmaels to 115 all out, C. Richards being the pick of the visiting batsmen with a knock of 36.

Whitland also enjoyed a good day at Llangwm, where a fine innings of 72 by Jonathan Thomas helped the Borderers to a healthy total of 189, despite the efforts of Matthew Kiff, who returned excellent figures of 5 for 27.

Thomas was also among the wickets, snapping up a couple as Llangwm were bowled out 41 runs short of their target, although wrecker-in-chief was Geraint Jones, who finished with 4 for 15.

Llangwm currently prop up the rest at the bottom of the table, while now just above them are Saundersfoot, who swapped places with Burton after suffering their fifth defeat of the season at the hands of the men from just over the Cleddau.

After restricting Burton to 134 for 9, with Neil Powling 3 for 36, Jon Mansbridge 2 for 15 and Sam Franklin 2 for 18, keeping the home batsmen in check, the total must have seemed eminently gettable for the seasiders.

But the Burton bowlers obviously had other ideas as Saundersfoot were skittled for a disappointing 75, only noteworthy contribution coming from Danny Caine with 28, as Johnnie Scale and Luke Hayman sent them packing with four wickets apiece.

Elsewhere around the county, among the individual highlights was a superb unbeaten century from Narberth’s Kyle Quartermaine, whose 115 not out helped his side to a massive 203 run victory over Johnston in division two, while in the same division, Llechryd’s John Curran also reached three figures (106), but there was no victory for his side as Pembroke Dock hung on for a draw.

More centuries came in division three, two in fact and both for Llanrhian, where Nigel Delaney 127 not out and Richard Reed 109 saw their side to a formidable total of 259 for 2 - and that was far too good for Llangwm Seconds who fell 148 runs short.

Stackpole’s Richard Mackay must also have been disappointed to fall two runs short of a ton (a case of the nervous 90s perhaps?), but his innings did set up a comfortable victory for his side against Haverfordwest Thirds.

So some great performances with the bat, but perhaps the best bowling performance of the day also came in division three, where Herbrandston found Lamphey’s David Blackwell (6 for 16) just about unplayable and were all back in the pavilion for just 29.

In reply, league leaders Lamphey made light work of reaching their victory target, although they did lose three wickets in the process.