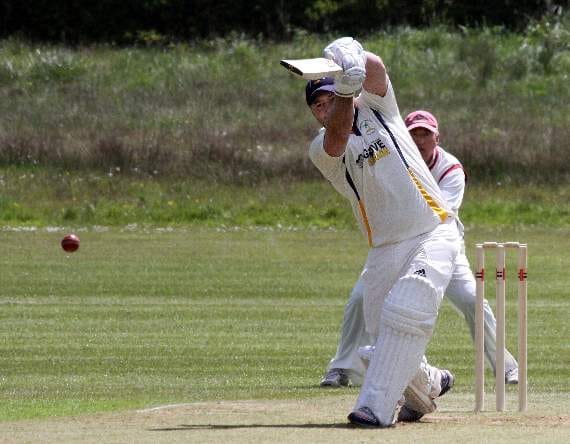 Ross Hardy hit another sparkling century for Kilgetty at the weekend ()

With last weekend’s sunshine providing great conditions for batting, there were some high scoring matches in the Thomas Carroll Pembroke County Cricket League on Saturday

And none more so than at Cresselly, where the home side must have thought they were on their way to victory in their division one match against?Whitland after posting a formidable total of 262 for 7 in their allotted overs.

Phil Williams 62, Simon Cole 58 and Ryan Lewis with an unbeaten 48 all kept the scoreboard ticking over at a healthy rate, as Matthew Davies 3 for 54 and Geraint Jones 2 for 52 tried to stem the flow of runs.

But it was with the bat that the two Whitland men really shone, as they completely turned things around when their side took to the crease, Jones smashing a superb 150 and Davies weighing in with a more than useful 66 not out, as the Borderers reached their victory target with seven wickets to spare.

Carew also got home with plenty of wickets in hand as they maintained their one hundred percent record at the top of the table with an eight-wicket success at Burton.

Tom Davies was the star of the show as, after picking up two wickets in the Burton total of 160 for 7, he went to town with the bat, hammering a quickfire 90 not out to steer his side to victory.

There was more high scoring at Lawrenny where the home side rattled up a total of 258 all out against?Saundersfoot.

Main run-getters were Tom?Cole, 62 and James Phillips 57, with Sam Franklin 4 for 56 and Tom Mansbridge 4 for 86 being the pick of the visiting bowlers.

In reply, Saundersfoot slumped to a disappointing 95 all out and now prop up the table. Robert Williams did most of the damage, returning figures of 4 for 21, while Brad McDermott-Jenkins chipped in with three wickets at a cost of just six runs and Ryan Morton also had a good spell to finish with 2 for 14.

One batsman certainly in the runs at the moment is Kilgetty’s Ross Hardy, who continued his impressive early season form in division two by hammering his second successive century... not to mention bagging a five-wicket haul with the ball.

On the receiving end were Cresselly Seconds, who saw their opponents rack up the day‘s highest score of 268, with Christian Phillips also contributing a fine 67.

The Cresselly side could only muster 127 in reply as the Kilgetty bowlers kept them in check, although Corey Hill 44 and Lyn Richards 32 did their best to break the shackles.

Still topping the table, though, are Narberth, who made it three out of three with a comfortable eight-wicket victory over visiting Pembroke.

Batting first, Pembroke struggled against the Narberth attack, with only Paul White 60 and Jack Harries 22 making any real noteworthy contributions in their total of 118 all out, Matthew Johns being the pick of the home bowlers with fine figures of 5 for 17 and Mike Reekie snapping up three at a cost of 19 runs.

The total posed few problems for Narberth, with Richard Adams 67 not out and Jordan Howell 34 not out seeing them home with something to spare.

Llechryd, who are currently lying second in the division and are another team with a one hundred per cent record, also had plenty in hand as they overcame Carew Seconds by nine wickets.

And the man they had to thank most for that was John?Curran, who was another of the day’s century-makers with an unbeaten 111, two others also coming in the division one match between Haverfordwest and Llangwm, where Simon Holiday steered the Town to a five-wicket success with an unbeaten 124 (his second successive ton) after Joseph Kiff had helped Llangwm post a useful total of 235 for 6 with a 106.