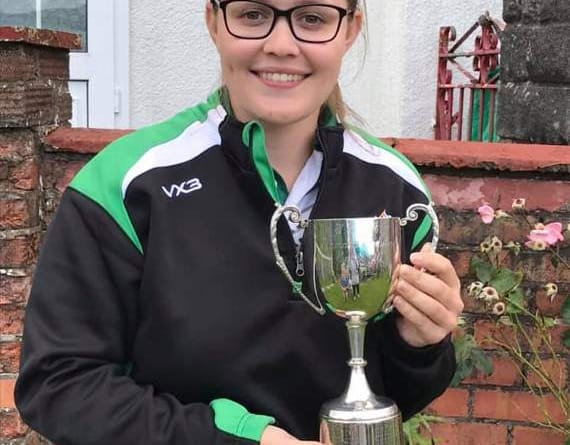 Less than a fortnight ago, Katie, who has just turned 20, won the West Wales Ladies county singles title and helped the WWLBA to lift the Savegar Trophy (the Welsh ladies county championship) for the first time ever.

Could that be topped? Well yes it could. Last weekend, Katie travelled to Merthyr Tydfil for the Welsh Ladies Finals Weekend and returned home with the coveted Under 25s title under her belt.

She is no stranger to the accompanying trophy, however, as Katie, who started playing bowls when she was just 10 years old, also got her hands on it back in 2015.

Indeed, Katie has a string of Welsh titles to her bow, having also won the Under 18s singles championship in 2016 and the Under 25 pairs championship with clubmate Katie Dickinson last year.

She has also been a member of the Welsh Under 25s team for the past seven years, gaining her first cap at Leamingston Spa in 2013, and only last month skipped the top Welsh rink in the home international series in Scotland.

Katie has certainly come a long way since she first picked up a bowl and made her league debut for Whitland Ladies as an 11-year-old, for she has also been a member of the county team for the past six years and her victory in the four-wood singles championship this year was the second time she has won the title, having also been successful in 2017.

She was also county Under 25s runner-up that year, and was awarded the WWLBA Victrix Ludorum, for not only winning the singles title, but being a member of the winning four in the county rinks.

After her Welsh success last weekend, Katie told us: “I haven’t quite come down off a high yet, especially after winning the Savagar Cup with my mum as President; it doesn’t quite feel real, and the season isn’t even over yet!

“I can’t wait to represent Wales in the British Isles Singles in Llandrindod Wells next year.

“Last weekend’s win will always be a special one,” she added, “as I had both my sisters there, along with my three nephews, Oliver, Hari and Joshua, and my little niece Mali. A special thank you to my parents too; their support is incredible.”

Katie will now be turning her attention back to the West Wales Ladies and Pembrokeshire League. Her Whitland team are currently sitting pretty at the top of the table and another victory this weekend will mean the start of even more celebrations!