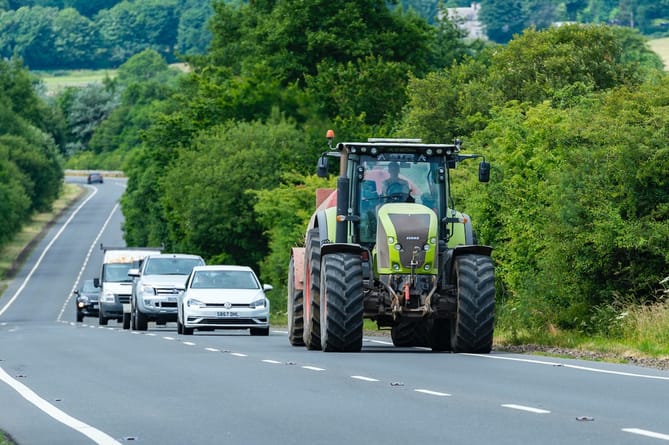 A warning for farmers this Easter Bank holiday weekend as police will be on the look-out for long queues disrupting the holiday traffic.

Leading farm vehicle insurance firm, Quotezone.co.uk, which compares insurance quotes for farmers, says police forces will be especially aware of the Highway Code’s Rule 169 this weekend, as record crowds could be headed for their country road trip.

Rule 169 says road users must not create or hold up a long queue of traffic; the rule pays special attention to those driving a large or slow-moving vehicle – potentially making tractor drivers high on the list to gain police attention.

Greg Wilson, Founder of Quotezone.co.uk, says holding up more than six cars could risk 3-9 points on a driving licence, and a fine of up to £5,000.

He comments: “Traffic jams could be more numerous and longer as holidaymakers avoid foreign trips due to the chaos and cancellation at airports and ports – with the addition of mass rail engineering works ruling out alternative transport closer to home.”

If tractor drivers find they are creating queues, the Highway Code and police forces advise that they pull over, where safe, and allow traffic to overtake, as frustration can lead to dangerous manoeuvres to try and bypass farm vehicles.

The police will also be looking at motorists with caravans, trailers and horse boxes who will need to be conscious of how their driving is affecting other road users. Sensible measures such as checking mirrors, and showing reasonable consideration for other road users should avoid prosecutions.

Greg Wilson continues: “Farmers are incredibly busy and it’s not always possible to pull over but it’s really important to be as safe as possible on the roads and also safeguard finances.

“Penalty points could see insurance premiums increase by as much as 25 per cent for six points - given tractor insurance can be rather expensive, it isn’t worth the financial risk or potentially losing a driving licence if the new penalties push total points to more than 12.”

Quotezone.co.uk helps around three million users every year, with over 400 insurance brands across 60 different products including niche products such as tractor insurance, digger insurance and farm vehicle insurance. Recommended by 97% of reviewers on Reviews.co.uk .