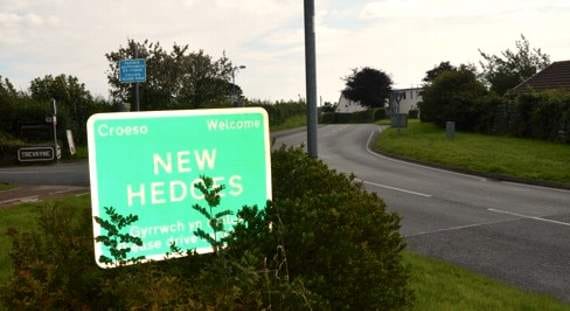 Among matters considered and discussed at the monthly meeting of St. Mary Out Liberty Community Council were the following;

Clr. Brace reported that the drain at St. Anne’s Church was still not working correctly, with rain and surface water from the road flooding the area around the church. Clr. Preston will once again contact Pembrokeshire County Council and request their advice and assistance with this issue.

Discussions took place regarding the applications, with council’s considerations beng as follows:

Knightston Lodge - Following a vote, the majority of council objected to this application. The concerns raised regarding this application were: Increase of traffic entering and egressing a narrow, busy village road adjacent to an existing traffic calming system; overdevelopment of an already crowded plot, with neighbouring properties being overlooked and overshadowed by the proposed new dwellings. The clerk was to seek clarity that the boundary of the plot, as shown on the site plan, does not encroach onto St. Mary Out Liberty property.

Keepers Nook – The council had no concerns or objections regarding this application. They believed that great detail had been afforded to the design.

Taylors Park – The council had no objections or concerns regarding this application.

Clover Cottage - The council had no concerns or objections regarding this application. They considered the design to be in keeping with the surrounding buildings and that the applicant had made good use of their plot.

Acknowledgment received from Pembrokeshire County Council of the application for a £5,600 precept made by St Mary Out Liberty Community Council.

Housing development: A meeting was held on Friday, January 25, at the Millbay site development with members of the PCNPA, Hale Construction, Millbay Homes, myself and three invited village residents. Additional members of the public also attended which made for some difficulties in accommodating the meeting, however it went ahead as planned. I was asked by the chairman to give an overview of the situation as I understood it. Primarily there is a major concern regarding the work being carried out near to the boundary with Hunters Park and other nearby properties. The earth mounds that have built up close properties in Hunters Park, the development of the ‘self-maintaining’ boundary wall, surface water management and the ongoing management and maintenance of the site after the completion of the development are amongst other matters that have caused concern. The members of the public were able to put questions to the representatives of Millbay Homes, Hale Construction and PCNPA.

Issues have been raised regarding the development prior to, and since its approval. Planning officers, committee members, representatives of Millbay Homes, Welsh Assembly members, the cabinet member for planning and myself have been actively engaged with this development from its onset and have met with residents, developers and planning officers to seek to address matters as they arise. Planning can be complex and emotive and for elected members it can prove to be frustrating when many hours of studying planning documentation and legislation do not uncover a planning material consideration that has been overlooked and can be challenged when an unpopular development is proposed. There are times when we can make a successful objection as with the proposed civic amenities site at Brooklands Nursing Home some years ago. Members of the public may look to their elected members to instigate proceedings to halt a controversial development, however planning legislation is made by Welsh Government and an elected members position on Pembrokeshire County Council is to ensure that planning policy is adhered to. With the advice of the personnel mentioned earlier and with the input of an independent planning consultant all indications are that planning obligations are being observed in this case. The site manager has agreed to keep nearby residents informed of any foreseen disturbance beforehand when possible. The earth bund overlooking properties at Hunters Park will also be reduced and managed more closely.

Budget considerations: At a recent budget seminar, councilor were asked to consider maintaining the current arragment for supporting the Pembrokeshire Citizens Advice Bureau (CAB). Members were asked to consider using the second homes council tax to meet this cost. Whilst I understand the need to continue to support the CA, I did raise the point that the second homes council tax was intended to offset the effects of second home ownership in the county and that those who pay the premium in general wish to see it spent on improving facilities where their second homes are i.e. playparks and upkeep of communal areas.

It is also worth noting that whilst PCC plans to close Tenby Tourist Information Centre next year due to it costing £45,000 per annum, investment in other areas to promote tourism is to continue. The Long Course and Ironman events in the county continue to be supported by PCC. There is no doubt that these events are of great benefit to the local economy and are key dates in our events calendar.

For the Long Course weekend, the sum of £20,000 was agreed by Cabinet for the 2019 event. Again, all PCC services during that weekend will be provided ‘in kind’. This is on the understanding that Activity Wales will review opportunities to promote Pembrokeshire as a tourism destination. Looking at promoting tourism overall, I think there is little doubt that these events are a worthwhile investment, but may have an adverse financial impact on other tourist services, namely the Tenby Tourist Information Centre.

Drainage on the by-pass: The drain at St. Anne’s Church has now been scheduled for work to expand the entry point. The contractor has been on site to carry out work to cut out the road surface alongside the gully which will restore the size of the opening. It appears that prior to surfacing, the kerbline on this section was not particularly high and I am told that it is unlikely that the re-surfacing work has altered the situation. PCC are not aware of any surface water problems previously, but will monitor the site during wet weather to see if an additional standard road gully is needed.

Loose Paving Stone: A loose paving stone at Lake Drive was reported last week and was repaired within seven days.

Political representation: The meeting was attended by Dyfed Powys Crime Commissioner, Dafydd Llewelyn. He gave a lengthy speech about his achievements to date; Saundersfoot and Tenby are included in his new CCTV surveillance programme. Pembrokeshire County Council are no longer involved in the scheme, saving the council £60,000. He highlighted the need for crime data recording to improve, with only 88 per cent of reports from the public resulting in a crime being recorded. He also reported that the recent Peel Inspections have resulted in an improvement to ‘Good’ status across the force area. He warned that Council Tax is going to rise again. Commissioner Llewelyn was careful to explain that this is directly due to central government promising to allocate an additional £850 million spending to policing in England and Wales. He explained that commissioners are obliged to raise their precepts as part of this increase.

A review of Neighbourhood Policing is currently underway in Dyfed Powys. Major changes are anticipated which will directly affect our community. Analysis of the local crime plan has revealed that a tipping point has been reached in the Tenby area, at the limit of what can be achieved with current resources. However, Commissioner Llewelyn took pains to emphasise Dyfed Powys’ status as the lowest crime rate area in England and Wales.

Youth Club: A new youth club serving the surrounding area (including New Hedges) will be opening on April 3 at the Regency Hall, Saundersfoot. The service will operate every Tuesday for six months, to then be reviewed. Funding is at a premium, with financial assistance being actively sought locally.

Local residents are warned to be vigilant following the theft of heating oil in the area. The theft of gates has also become prevalent. The latest telephone, postal and email scams were discussed. PCSO Moffatt was saddened to report that a local resident was recently conned out of £15,000.

Compassionate Communities. A representative of ‘Nos Da’ (No One Should Die Alone) gave a short presentation about their new voluntary service provided in the local area. Working in partnership with the Paul Sartori Foundation, volunteers act as companions to people receiving end of life care who have no friends or family. The service is provided to patients at South Pembs Hospital and local care homes. Referrals are made by doctors and district nurses.

• The next meeting will be held on March 12.