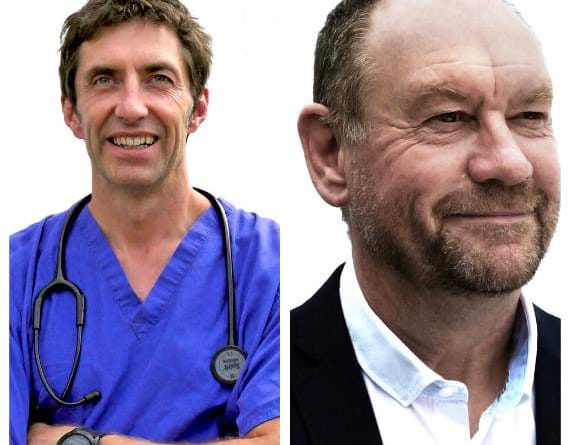 Dr. Rhys Thomas (left) is stepping down with Cefin Campbell stepping in

Dr. Thomas, a senior consultant, and former army medic with the rank of Lt. Colonel who served in many conflict zones, has been in the front line against the virus since the outbreak of the pandemic.

As that relentless fight continues, he’s stepped down as Plaid candidate for Carmarthen West and South Pembrokeshire in the coming Senedd elections in May.

Dr Rhys Thomas said: “As one who believes passionately in Plaid Cymru’s vision for Wales, it’s been a very difficult decision. But as a doctor in these incredibly challenging times, I’ve had to dedicate all my time and energy to develop new ways of combating Covid-19.

“I hope my time to serve Wales as a politician will come again in future, but for now I have to serve my country as a clinician.”

As Dr. Thomas steps down, Cefin Campbell, a highly respected and experienced county councillor, has been selected to fight the constituency in May.

He’s also number one on the Plaid Cymru candidate list for Mid and West Wales.

Cefin lives in the Tywi Valley and is married to Mari, a recently retired district nursing sister, and they have three daughters.

Cefin is the member for Rural Affairs and Communities on Carmarthenshire County Council’s Executive Board.

He chaired the action group which drew up a 55-point plan to regenerate rural areas, centred on ten small market towns, including Whitland, St Clears and Laugharne, as well as the Anti-poverty panel which instigated a multi-million-pound strategy to tackle poverty in one of the poorest council wards in Wales.

Cefin led on the working group which published an action plan supporting Carmarthenshire’s target to be net zero carbon by 2030 – the first council in Wales to declare a climate emergency.

He also chaired a cross-party group looking at ways of combating racism and discrimination.

Last month, he successfully persuaded the county council to accept a Notice of Motion calling on Welsh Government to legislate to restrict the damaging proliferation of second homes.

Cefin said: “I care passionately about the future of rural areas, the environment, decent housing and jobs for our young people in towns and villages, and tackling the poverty which exists in both urban and rural communities.

“I’ve dedicated much of my life during recent years to leading on action plans to address these issues. For far too long, this corner of Wales has been forgotten and neglected by the Conservative UK Government in London and the Labour Welsh Government in Cardiff.

If elected, I’d fight tooth and nail to remedy that.”

Commenting on Cefin’s candidature, Dr. Thomas said: “I’ve known Cefin for many years. He’s a very astute, enthusiastic, energetic, and intelligent person, with an incredible range of knowledge in so many fields.

“He’s a great communicator and would make an excellent and formidable Member of the Senedd.”