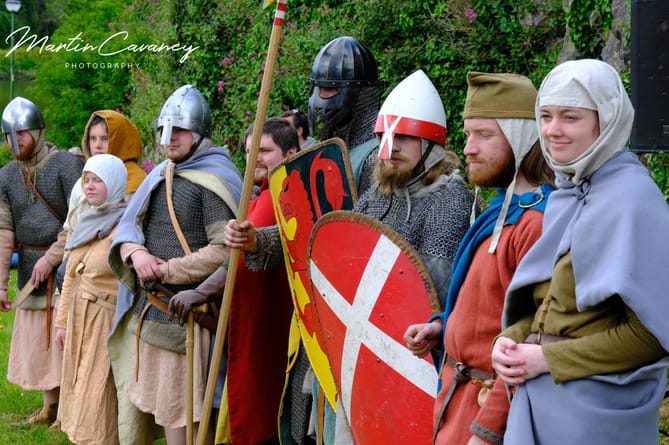 The much awaited unveiling of the William Marshal statue took place on Saturday May 7 and the community turned out in force to witness it. And they were not disappointed. HM Deputy Lord Lieutenant Mr. Meurig Raymond did the honours, pulling away the covering sheet to reveal the magnificent, bronze statue – a life size knight mounted on his horse.

In giving her speech of thanks to the many people involved in the project, Mayor of Pembroke Linda Asman said:

“My term as Mayor began at a low point - when we were still in restrictions - so it is lovely to end my term on a high point - on the occasion of the unveiling of this impressive statue of William Marshal.

“It was almost five years ago that we gathered on the other side of the castle, on Pembroke’s Mill Bridge, to unveil the statue of Henry VII, which has been a real success story, quite transforming that part of Pembroke. This led to the idea of a statue trail, an arts trail which would highlight important people and events in the story of Pembroke, a town which has played such an important part in shaping our nation. At the same time enhancing our town to attract visitors, so greatly needed for the local economy.

“Harriet Addyman, sculptor of the Henry VII statue, has done Pembroke proud once again with this impressive statue of William Marshal, a remarkable man. In his long life, he won fame and fortune as a tournament champion, loyally serving five kings, saved England from French invasion and perhaps most famously of all was responsible for saving Magna Carta. On his death, the Archbishop of Canterbury, Stephen Langton, described him as ‘the greatest knight to be found in all the world’, so greatly respected was he. Our connection with him? He was Earl of Pembroke and he has left us a lasting legacy - his castle built in stone.

“The statue came about as the result of a fundraising campaign led by Pembroke & Monkton Local History Society, of which I am proud to be chairman. Pembroke Town Council has been fully supportive and invaluable assistance given by Town Clerk Suzie Thomas – the project could not have succeeded without that support. The bulk of the funding has come from very generous private donations from the many people and organisations who have enthusiastically supported this project, people who believe as I do that art is so important in enriching our lives. I am especially grateful to Mr. Richard Evans as it was his very generous donation that put us on this journey for a second statue in Pembroke. And to Mr. Stephen Thornton of Valero who is always so supportive of worthwhile, local community projects. Organisations deserving special mention - Pembroke Rotary, Pembroke Male Voice Choir, and even further afield, to the Bar Council, Inner Temple (where William Marshal is buried) and Middle Temple. So many people have donated – so thankyou to all and everyone.

Following the unveiling ceremony, everyone made their way to the Castle for a community celebration which, thanks to the generosity of the Castle Trustees, was opened up with free entry for all. A programme of entertainment, music and activities ran throughout the afternoon including a concert by Pembroke Male Voice Choir, Neil Thomas, stalls in the marquee, children’s activities organised by Messy Church and a competition for the best-dressed knight and princess . To add to the occasion, visitors were be able to find out more about William Marshal and his times from the Living History Society, Historia Normannis.

Mayor Linda Asman commented: “After a couple of years of restrictions, it was lovely once more to be able to come together as a community. Around 2½ thousand people attended the event and it was lovely to see so many people enjoying themselves – young and old. Even the weather was perfect. It was a truly memorable day”.