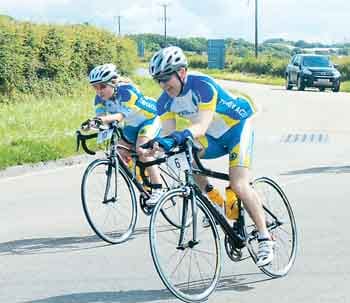 Shaun and his daughter Rhianne will be taking on the Prudential Ride London-Surrey 100 challenge in the Tenby Aces Cycling Club colours.

Tenby Aces Cycling Club member Shaun Griffiths will be taking on the challenge of cycling 100 miles in the inaugural Prudential Ride London-Surrey 100 event this weekend.

Shaun will be cycling on the Olympic Road Race course as one of 150 cyclists on the Anthony Nolan Charity Team, with 20,000 cyclists participating in total in the event which takes place on Sunday, August 4.

The event, celebrating the legacy for cycling created by the London 2012 Olympic and Paralympic Games, aims to be the largest charity fundraising cycle event in the world.

Anthony Nolan is a pioneering charity that saves the lives of people with blood cancer who need a blood stem cell, or bone marrow transplant.

"I have a close relative who is receiving treatment for a blood cancer condition, so by taking on this cycle challenge, I have been able to use my lifelong passion for cycling to give something back to the charity which helps people with the same condition," said Shaun.

"My daughter Rhianne is also one of the participants and will be cycling in the Tenby Aces Cycling Club colours and helping me with my fundraising for the charity," he added.