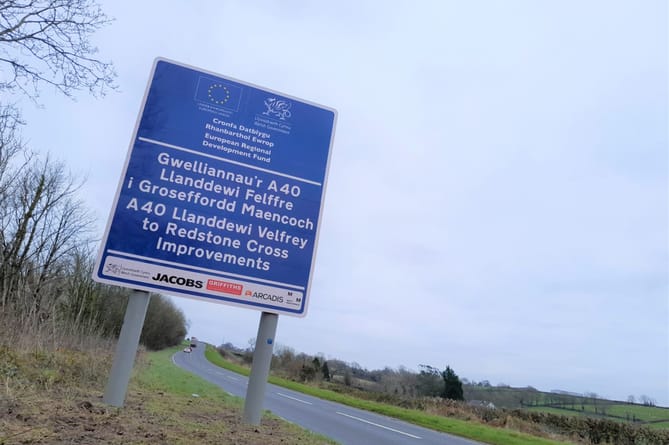 The civil engineering and construction company overseeing the A40 Llanddewi Velfrey to Redstone Cross improvements project have moved to clarify that there will be no long term closure of the roadway at night.

Alun Griffiths (Contractors) Ltd who are the principal contractor for the improvements scheme, have stated, in response to to an article published online by the Western Telegraph this week, which stated that the A40 will be closed for 18 months, that this is factually is incorrect, and there will be no long term closure of the A40 at night, for the scheme which is now well underway.

“I can confirm that there will be no long-term nightly road closure to the A40 between Redstone Cross and Llanddewi Velfrey,” said a spokesperson for Alun Griffiths (Contractors) Ltd.

“Consultation is underway for a potential very short term closure to allow the new A40 to connect with the old A40 later on in the project, potentially during a weekend towards the end of 2022, but this has not yet been confirmed.

“A closure of a section of the A40 would be our last option and will only take place if completely unavoidable.

“Further information will be published with a significant amount of notice and would take into account emergency service routes and options for diversions for motorists around the section of road affected.”

Griffiths completed this action after listening to feedback from various stakeholders and it is anticipated that this will allow for flexibility to temporary speed restrictions moving forward as construction progresses.

Subsequent to acceptance, the TTRO notice relating to this along with other contingencies has recently been published by Welsh Government, which is what the original new article refers to.

“The TTRO was recently resubmitted to allow for changes to the temporary speed restrictions following feedback from our stakeholders.

“Other elements of the TTRO are present as a contingency and if a road closure is required, it would need to be as a result of unavoidable works, will be very brief in nature, will be well broadcasted with appropriate diversions in place, and kept to an absolute minimum during off peak hours,” they added.