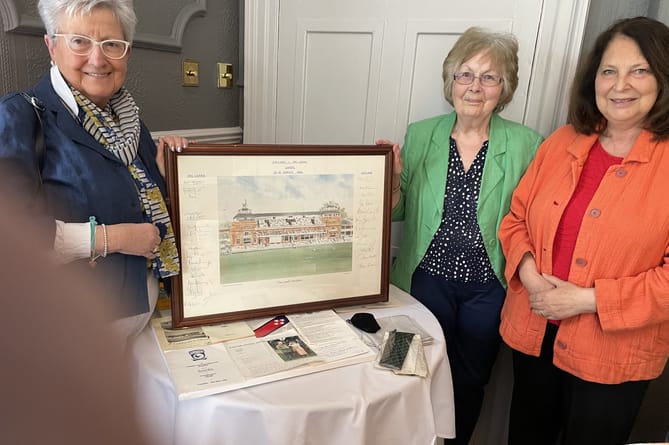 President Jane was delighted to welcome Maggie Titterton to the May meeting of Narberth Ladies Probus Club. Maggie worked for many years as a producer of Radio Sports programmes at the BBC. Originally from Whitland, she attributed her passion for sport to her father. She had spent many hours listening with him to test match commentaries by such legends as John Arlott.

Banksy style artwork with a message pops up across Tenby

Doorman John hangs up his ‘bouncer’s badge’ after 40 years

At just sixteen, she took up an internship at the BBC, where her mentors were Cliff Morgan and Tom Davies. Over the next few years she had first-hand experience of all aspects of radio production and was soon part of the production team for a brand new sports service, Grandstand. In 1968, she had the opportunity to be part of the radio coverage of the Mexico Olympics, but instead returned to Wales and got married. However, in the 1970s she was head-hunted and returned to work as a senior producer for a pioneering new service, Radio Cymru.

Maggie gave a fascinating overview of her long and varied career with the BBC and outlined the many difficulties involved in producing sports programmes, particularly when things go wrong. Notably, she recalled the live Broadcast of the fight between Cassius Clay and Sonny Liston in 1964, over in the first round, although many hours had been allocated to the broadcast. She also talked about some of the misogyny she had experienced as a female sports producer in a predominantly male industry.

Nevertheless, she had thoroughly enjoyed her time with the BBC, but, in 1995, took up a very different career path and, after obtaining a degree in child development, took up a new role for Carers UK.

Club Member Haulwen Roberts gave the vote of thanks for Maggie’s most interesting talk.