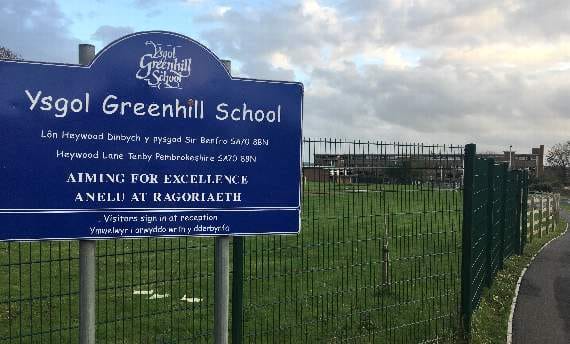 Proposals to hold ‘pop-up’ licensed events at the grounds of Greenhill School in Tenby over the summer period, and throughout the year, have been scrapped.

At an Extra-Ordinary meeting on Tuesday night, Tenby councillors recommended refusal to the local authority for the licensing application submitted by Pop Up Ops Limited for the playing fields at the secondary school located on Heywood Lane, after there had been a backlash against the proposals from local residents and businesses in the town.

A meeting was also held at Greenhill School on Thursday evening to discuss the matter, and following on, a spokesperson for Pembrokeshire County Council released the following statement: “Following a meeting of the full governing body of Ysgol Greenhill held on May 26, it was decided not to accept the proposal of a pop up food and drink event to be held on school grounds during the summer break.”

Welcoming the decision, Tenby’s Mayor, Clr. Sam Skyrme-Blackhall said: “It is the right decision for the school, for the community and for the town”.

The Mayor, who has been involved in detailed discussions with the school and others over the last week, added: “I hope that there is now an opportunity for a new partnership between the school, the community and businesses – working together for the good of the children and young people and hopefully raising some much needed funds too.”

The first type of event that had been proposed was a ‘big top tent’ entertainment festival, serving food and drink that has been run in Singleton Park previously, with the applicants requesting a ‘premise licence’ up until 11 pm throughout the six-week summer holiday period. Swansea based company Creative Hospitality Group (CHG) were behind this application along with Pembrokeshire-based broadcasters Pure West Radio.

The application would have been valid from 8 am to 11 pm, seven-days-a-week for up to 5,000 people per day.

Residents in the locality, along with various licensed business owners in the town expressed their concern over the proposal, and also a lack of consultation towards those living in the area, and had the chance to express their discontent at an open Q&A at Greenhil School’s hall last Thursday (May 19).

Members of Tenby Town Council unanimously objected to the proposals on the grounds that they felt the application failed to meet the licensing objectives in relation to prevention of public nuisance, with members feeling that the potential for noise generated by the licensable activities would be detrimental to the amenity of neighbouring residents.

It was also pointed out by those concerned about the application that with a care home close by, there was a huge concern for vulnerable and elderly people that reside at the facility.

“In general this is a really inappropriate venue for this kind of event, and there are so many reasons that people are against it,” remarked one local resident at Tuesday night’s meeting.

“Are the local police force aware of this proposal, as they can barely cope with policing Tenby any way over the busy summer period!”