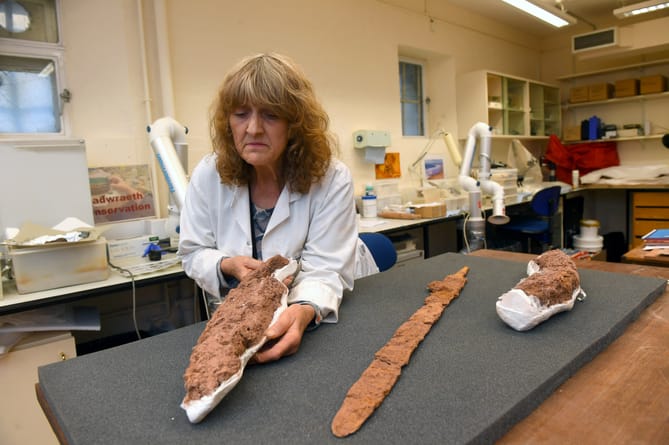 The collection of chariot fittings and grave goods were discovered during a major archaeological excavation of the Iron Age chariot grave undertaken on farmland in south Pembrokeshire in March 2019 (Treasure Case 19.15). The initial discovery was made by finder Mike Smith, who first reported a group of bronze decorated chariot fittings from the locality as a metal-detector find, which were previously declared treasure in January 2019.

The iron tyres and associated iron and bronze wheel hub fittings relating to this two-wheeled chariot, which had been buried whole in the grave.

Census 2021: How do official population figures compare to estimates?

Parts of bridle-bits and leather harness fittings, once attached to the pony pair driving the chariot, representing missing fragments of the harness set already found in 2018.

A complete iron sword and fragments from two or three spears, suggesting the person buried may have been a warrior and a person of high standing within their community. Although no human bone from the burial survived in the acidic and stony Pembrokeshire soil, the evidence suggests that the burial was once laid out on the fighting platform of the chariot.

The grave was at the centre of a circular burial monument, with a soil mound piled over the grave. This monument was placed near to a previously unknown Iron Age promontory fort, also discovered during the archaeological investigations at the site and its surrounding area.

Adam Gwilt, Principal Curator for Prehistory at Amgueddfa Cymru and one of the chariot project team commented:

“This is the find of a lifetime - the first known chariot burial ever to have been found from Wales and southern Britain. It dates to the second half of the first century AD, two thousand years ago, when the Iron Age communities of western Britain were in conflict with an invading Roman army.

“It provides a fascinating window onto the poorly know Demetae people, the Iron Age tribe thought to occupy this region at this time. Speculation still abounds about who the person in the grave once was. The research team is now looking at a community elder or maybe a warrior leader, a person of high status seemingly closely associated in life with the nearby hillfort.

“Our work on unravelling this intriguing archaeological story continues, as we prepare to investigate the fragile artefacts further and to undertake the conservation treatment necessary to care for and present them to the people of Wales in years to come.”

Archaeological surveys and excavation of the chariot grave was undertaken by a team of staff and volunteers led by Dyfed Archaeological Trust with curators and conservators from Amgueddfa Cymru – National Museum Wales, to ensure the fragile artefacts from the grave were carefully lifted and transported back to the national museum. This major ongoing heritage project, led by Amgueddfa Cymru – National Museum Wales, also involved Cadw, PLANED and Pembrokeshire College as partner organisations, with grant funding also provided by the National Lottery Heritage Fund Wales in 2019-20 and by The Headley Trust.

Amgueddfa Cymru – National Museum Wales intends to acquire this collection of artefacts for the national collection, following their independent valuation by the Treasure Valuation Committee. Planning work is now underway towards funding and enabling a research programme and conservation of the chariot and grave group, for the site to be published and then presented to public audiences in west Wales in years to come.