Tenby Male Choir’s season off to a flying start 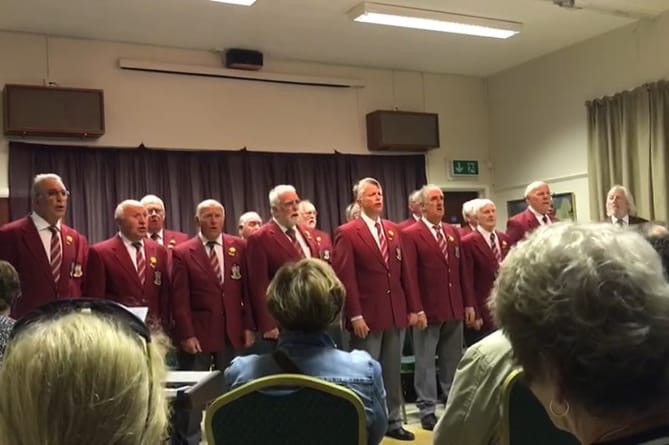 Tenby Male Choir’s 2022 season is off to a flying start with two successful concerts now under their belt.

On Thursday May 5th, after two long years the Choir finally made it back with a sterling performance at Penally Village Hall. Illness had struck at the last moment, rendering Musical Director, Ian ‘Wilbur’ Williams, the soloist for the night, Paul Varallo, and other choristers unavailable. However, the nearby practice trenches seemed to fire choristers’ spirits to face and overcome adversity.

Chairman Tom Pearce stood in as last minute soloist, David Blackmore stepped into the breach as MC and Accompanist Jill Williams led the choir seamlessly through to what can only be described as a polished performance. The hall was packed with standing room only, and some of our supporters even had to stand outside. The response from the audience was just what the doctor ordered, encouraging and instilling confidence in the boys, convincing them that they could still cut the mustard. Organiser for Penally Village Hall, Jenny D’Arcy, said “Thank you, the concert was fantastic, our audience thoroughly enjoyed it.”

Tuesday, May 17th, saw the Choir present their first Tenby concert at St Johns Church, where they’d closed their last season in September 2019. A reinforced line-up, once again led by Accompanist Jill Williams, again delivered an impressive performance of familiar and popular tunes. The choir swept from classic Welsh hymns, across the American rivers of ‘Shennandoah’ to the Swiss Alps with ‘Climb Every Mountain’. Favourites ‘Hallelujah’ and ‘Rhythm of Life’ were especially well received.

Guest soloist Marilla Evans (Trumpet) accompanied by Mark Thompson, delighted and dazzled all present with her excellent playing and choice of pieces.

The Choir were proud to reprise part of their November 2019 Millennium Stadium set when Wales returned from the Rugby World Cup to play the Barbarians. ‘Yma o Hyd’ and ‘Sospan Fach’ welcomed Wayne Pivac from Scarlets as he took over as Head Coach. Warren Gatland was thanked for his leadership with his favourite, ‘Calon Lan’.

Wearing yellow and blue flashes on their lapels, the Choir dedicated the poignant ‘Anthem’ from the musical ‘Chess’ to the people of Ukraine, before singing South Africa’s rousing anthem, ‘African Prayer’ and closed with Wales’ own ‘Hen Wlad fy Nhadau’.

The choir’s next appearance will be at St Mary’s Church, Pembroke, on May 26th at 8pm with a fundraising concert for the Ukraine appeal, and they return to St Mary’s, Tenby for a Jubilee Concert on June 2nd.