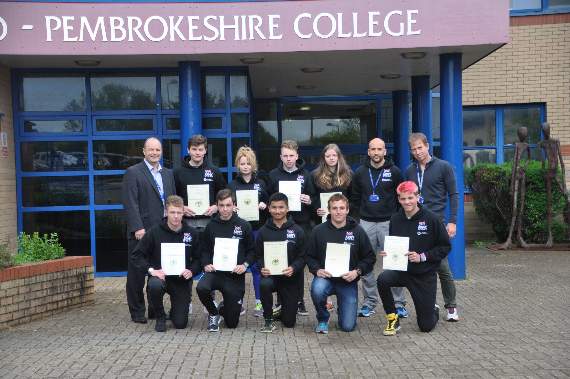 Pembrokeshire College’s level 1 traineeship in public services won several prizes at the National Public Services competition after being put through their paces, both physically and mentally!

The competition was held at Brooklands College in Surrey at the weekend and involved several competitions testing their stamina, strength and problem solving abilities.

Over the course of the day the group took part in 10 competitive activities, including a tug of war, drill and a timed high rope challenge. Along with the practical challenges, the students were also tasked with a crime scene investigation scenario and an emergency disaster recovery.

To demonstrate their understanding of real-world events, each group was asked to present their researched topic on citizenship.

Science at Sea with the tall ship Johanna Lucretia

Public services student, Tomos Lindley, enjoyed the day and enthused: “The challenges really pushed us to our limits. We encountered scenarios that were entirely new to us, but we all worked well as a team.”

College lecturers Andy Desborough and Steve Quinton have seen students taking part in the competition over the last four years.

Andy said: “We are immensely proud of this year’s group. They have achieved national standards that will help them in their future careers.”

Competing against six teams from four colleges, the Pembrokeshire College group came first in the Royal Marines Fitness Challenge and the team quiz, second place for their presentation and third place in drill, with judges commenting on an ‘exceptional drill’ formation.

The group also received commendation on their preparation of a wood pigeon in the field cookery task, the judges saying that it was the tastiest meal in the entire the competition.